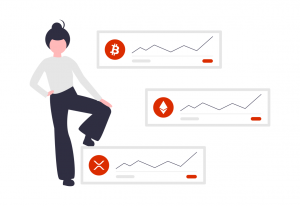 There’s compelling proof that BTC can’t be medium of exchange. Just examine what’s going on in centralized and decentralized exchanges (CEXs & DEXs). Before the advent of USDT, USD was the dominant exchange medium in CEX. Other than USD (which was cumbersome by the way), BTC was poised to become the most common medium of exchange amidst all the bartering that was going on.

Each CEX at that time was like a petri dish, in which tokens were being bartered, and BTC had a good chance of becoming the common medium of exchange. When USDT came along, however, it became the dominant medium of exchange almost immediately, surpassing both USD and BTC. At this point, practically all traders started doing indirect exchanges instead of direct barters: exchange BTC for USDT first, for example, before exchanging USDT for an alt-coin.

Today, we can easily compare the velocities of any token in CEXs and DEXs in either coingecko.com or coinmarketcap.com and if we can agree that velocity is a very good metric for “moneyness”, we should be able to agree that BTC is one of the least money-like. What I am suggesting to be the measure of velocity is called the daily “Volume / Market Cap”. Right now, BTC’s velocity is 0.0451 (past 24 hours), and USDT’s is 0.605 – daily proof that USDT is more money-like than BTC.

ROKS is a new, more transparent way to send money. Currently we offer remittance between Washington State & the Philippines.